The Capitol Lake – Deschutes Estuary includes the 260-acre Capitol Lake Basin, located on the Washington State Capitol Campus, in Olympia, Washington. This waterbody is an important recreational resource and valued amenity; however, it suffers from numerous environmental issues.

Capitol Lake is currently violating water quality standards because of high levels of phosphorus, which cause algae blooms that deplete dissolved oxygen in Capitol Lake and the adjacent Budd Inlet, using up oxygen essential for fish and other aquatic life.

Every year more than 35,000 cubic yards of sediment from the Deschutes River is deposited within the lake basins, resulting in increasingly shallow conditions. Today, the lake is about 21 percent smaller and it holds roughly 60 percent less water than it did in 1951.

Fish and wildlife habitat are impacted due to the presence of several invasive and nuisance species including the New Zealand mudsnail, purple loosestrife, Eurasian watermilfoil, nutria, and Canada geese. These species out compete and negatively impact native populations.

Over the years, high bacterial levels and the presence of invasive species have resulted in impacts to the recreational use of Capitol Lake. The presence of New Zealand mudsnails resulted in official closure to all active uses in 2009 and active use of the waterbody continues to be restricted today.

The EIS will evaluate and identify a preferred environmentally and economically sustainable long-term management alternative for the Capitol Lake – Deschutes Estuary Project.

Where is the project located? 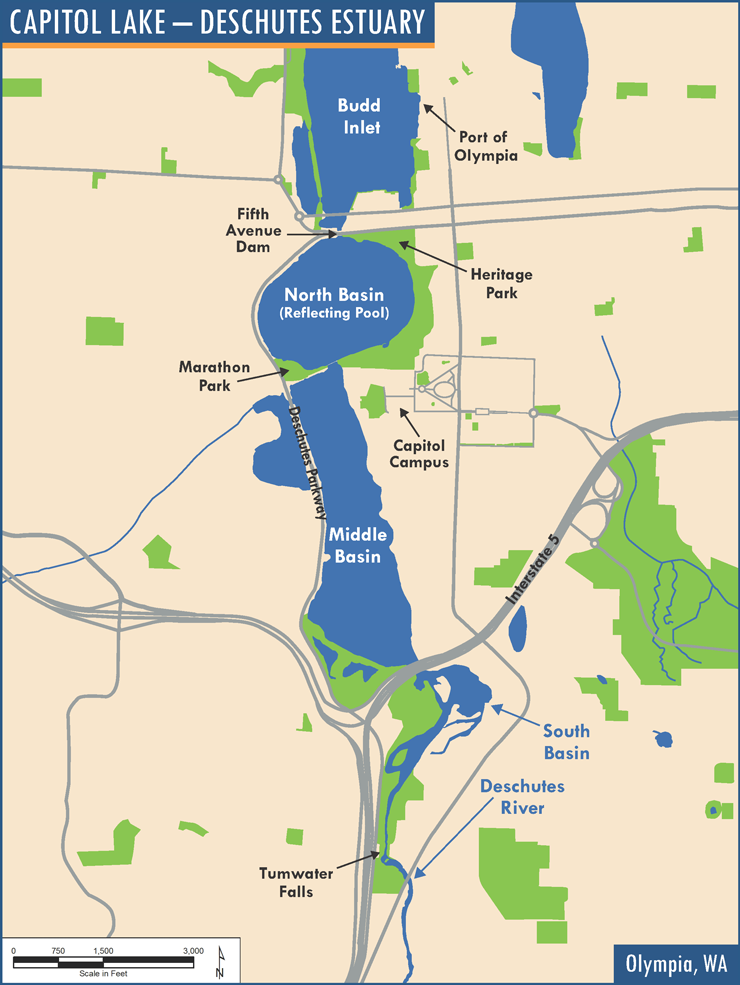 While the limits of the Capitol Lake – Deschutes Estuary Long-Term Management Project are focused on the area that Enterprise Services manages (the Capitol Lake Basin), it is recognized that the interconnectedness of the system requires coordinated agency efforts.

What alternatives are being evaluated?

The State Legislature has required that Enterprise Services evaluate a Managed Lake, Estuary and Hybrid Alternative in the EIS. In an EIS, an analysis of the “No Action Alternative” is also required. The fundamental concepts for these four primary alternatives are summarized below. A measurable evaluation process was used to identify components of the alternatives that best meet project goals. Enterprise Services acknowledges that these alternatives may be modified, changed, or replaced during preparation of the EIS.

The Managed Lake Alternative is similar to existing conditions, with additional strategies to manage sediment accumulation and future deposition, including maintenance dredging throughout the North Basin. Shoreline habitat would be constructed to improve ecological functions. The Managed Lake Alternative would retain the Fifth Avenue Dam and tide gate in its current configuration to maintain the historic reflecting pool and the Capitol Lake Basin.

Under the Estuary Alternative, tidal hydrology would be restored throughout the basin. A 500-foot opening would be constructed at Fifth Avenue to allow tidal exchange. This opening would allow tidal flow (saltwater) into the North basin during approximately 75 percent of tidal elevations. Sediment would be managed through initial dredging in the Middle and North Basins and recurring maintenance dredging in Budd Inlet. Shoreline habitat would be constructed to improve ecological functions, and mudflats would be the predominant habitat type.

The Hybrid Alternative allows management of the basin by establishing a tidal estuary in the western portion of the North Basin, and throughout the Middle and South Basins. A 500-foot opening at Fifth Avenue would be constructed to allow for tidal flow. A retaining wall also would be constructed, at approximately the centerline of the North Basin, which would result in a 45‐acre saltwater reflecting pool adjacent to Heritage Park in the North Basin. Construction and maintenance of the smaller reflecting pool, in addition to restored estuarine conditions in part of the basin, gives this option its classification as a hybrid. Sediment would be managed through initial dredging in the Middle and North Basins and recurring maintenance dredging in Budd Inlet. Shoreline habitat would be constructed to improve ecological functions.

In an EIS, an analysis of the “No Action Alternative” is required, against which the effects of the action alternatives can be evaluated and compared. The No Action Alternative is intended to represent the most likely future for the project area if the project is not implemented. Limited operations and maintenance activities to retain the existing Fifth Avenue Dam and tide gate in its current configuration would continue. Enterprise Services would continue to implement invasive species management strategies. Sediment management strategies, like maintenance dredging would not occur. The No-Action Alternative would also include planned and funded actions that have been identified by the Washington State Department of Ecology and approved by the U.S. Environmental Protection Agency as part of a water-quality improvement strategy.